It was the weekly comic strip publication ‘t Kapoentje which published the different stories. ‘Stories’ because many people think that there is only one Janneke en Stanneke story, namely the one which in the end got re-published for the very first time in album format by Ciso Stripgids (via Brabantia Nostra) in 1989.

It’s not all that weird that many people are unaware of the other stories, because if you don’t get published, you easily get forgotten, and that is exactly what happened here. 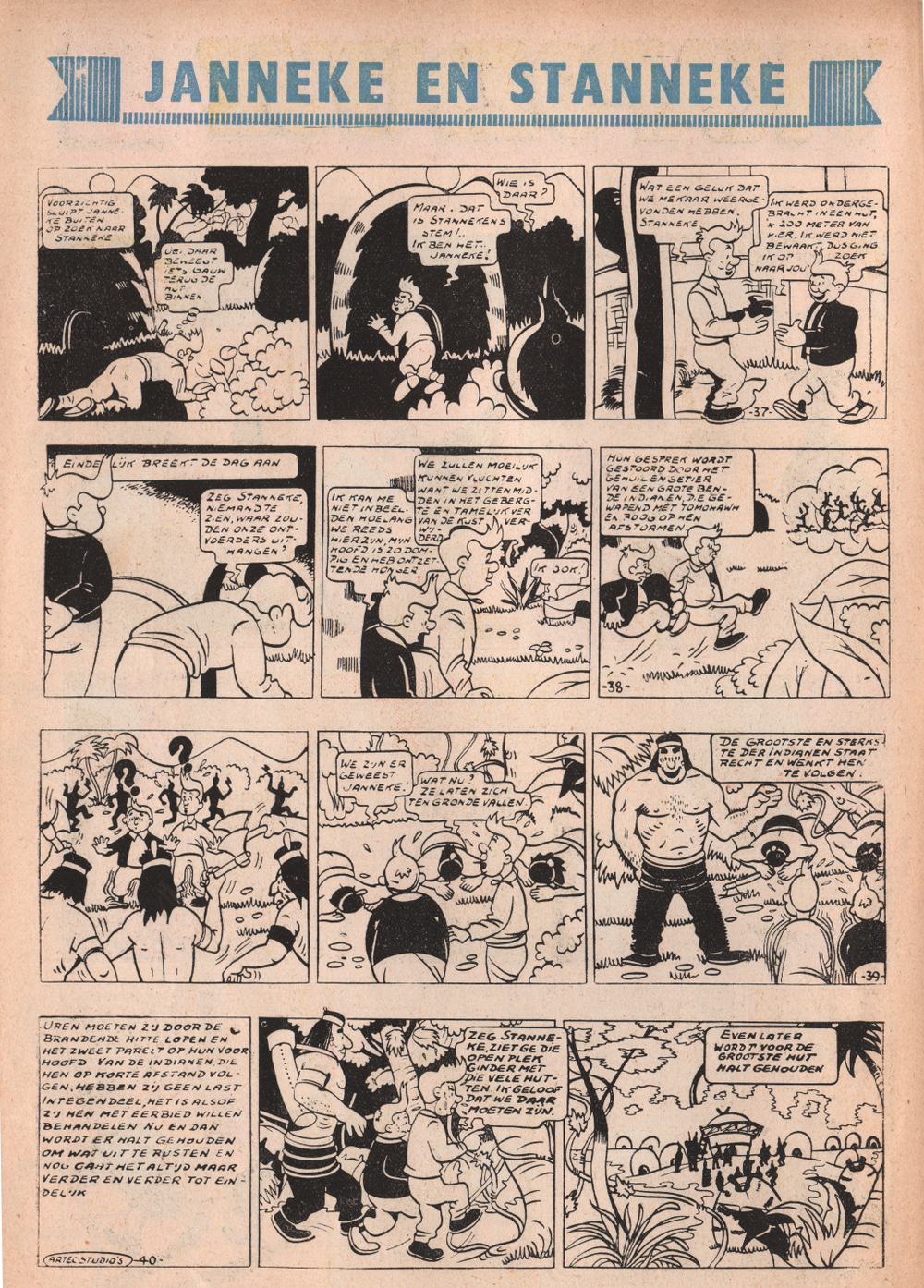 The stories got published in a weekly only and got forgotten over time by most people. However, if you paid attention when reading the 1989 publication, you could have seen that the 60-strips long story actually is the follow-up story to another Janneke and Stanneke story. It starts with a text reminding readers what happened just before.

Today we present you the strips 37, 38, 39 and 40 of an unpublished untitled story (in album format that is). Note that none of the Janneke en Stanneke stories actually had a title, which doesn’t really make it easier to know what you are looking at. The duo finds themselves in the company of indians this time.

Don’t look too much for a story, because the series is actually a collection of gas with a loose story woven into it, the same with the story published in album format. Nevertheless, it’s part of De Moor’s heritage and a very good way to see how Bob De Moor‘s technique improved over time.

In the page published today you can see that De Moor is still a bit clumsy as far as the structure of the page, strips and cases is concerned. There clearly was no plan when creating the story or the page in particular. Not surprising, that year he would complete at least 17 stories… so there was no time for much story development let alone a lot of preparation. Things had to move on, and fast because the contracts for new stories kept on pouring in at the Artec Studios.

You can also see that De Moor struggles when it comes to putting people in a position which is not just walking or standing still. Look at case 1 and 2 for instance where he clearly is not at ease with the way he has drawn things. Also the use of a black shadow in the first 2 cases is not well-done (he would excel in it later on in his career through).

Nevertheless, these are stories which definitely deserve a re-publication. We wouldn’t be surprised that the fine people at Brabantstrip will ‘attack’ this in the next months or years (hint hint hint!).

An interview with Ronald Grossey, author of the new Bob De Moor biography