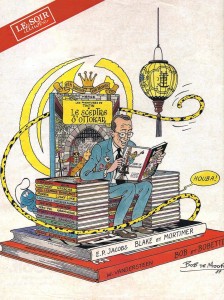 In 1989 Bob de Moor created this drawing for the Le Soir Illustré, it shows the late King Baudouin reading a Cori album  whilst sitting on a throne constructed of comic albums. This drawing actually holds a lot of info if you look more closely. Bob de Moor included every single of his favorite fellow comic writer colleagues. Missing however is Paul Cuvelier (Corentin) for some odd reason.

The way the items are incorporated might indicate how de Moor saw the comic landscape at that time. The back of the throne consists of the Tintin album “Le Sceptre d’Ottokar” by Hergé while the large basis of the throne is made of E.P. Jacobs (Blake and Mortimer) and Willy Vandersteen (Bob et Bobette).

Also appearing on the left side is a Smurf (Peyo) and apparently on the right side behind the right arm of the throne is the *Houba* Marsipulami (André Franquin) busy planning something. The lantern (probably) evokes Yoko Tsuno (Roger Leloup).

(Thanks to Alain Demaret for the hint)

A De Moor wedding at Moulinsart with Tintin, Haddock and Castafiore in the audience