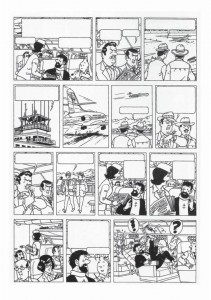 In 1965 while Hergé was on holiday Jacques Martin and Bob de Moor made a fake Tintin page (the so called famous ‘planche bidon’) which the Swiss Lausanne based magazine L’illustré took for a real genuine Hergé page. When Hergé got to see the article he wasn’t too pleased, but afterwards asked on numerous occasions to buy the page from Martin. Martin agreed on one condition: that he would not destroy the page. Hergé (silently) did not want to agree on those terms so it seems. The page, on which Bob and Jacques worked on for a couple of days, ended up in a Jacques Martin auction many years later (together with the unfinished work for the Jo-Zette & Jocko story “La main noire”).

Critics would later say that they would have recognized it as being fake since it missed the ‘naturel’ from Hergé. Personally I (Bernard) am more inclined to think that noone would have seen the difference. Heck, at the moment they are even selling Hergé drawings which were in fact made by Bob de Moor and Jacques Martin to begin with. The Studios were very well integrated in each new Tintin album and learned from Hergé how to work (and vice versa). It’s my belief that minimizing the role of the Studios is some kind of art revisionism. Hergé was key, but his colleagues were therefor not less important. And we should keep in mind that the Studios did deliver high quality work (with a few exceptions maybe).