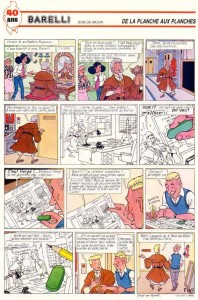 This Bob de Moor page was published in the “spécial 40 ans du Journal de Tintin“. In the story Barelli meets Hergé. The last sequence in the story – where Barelli says that Hergé can take it easy as Bob de Moor will take care of things – is probably not just there for the fun of it. The issue was released around the same time in 1986 when Tintin’s “Alph-Art” was released, which gives it more than just one simple meaning. It’s widely known that Bob was far from being happy that he wasn’t allowed to complete the last Tintin album. What do you think?