As you could read in this September 9 article, Professor Quick was a series which Bob De Moor created in 1947 for the Flemish weekly Week-End. Today we present you a few details from this one strip cartoon which was titled “Professor Quick in actie” in Week-End. The strips were always publicized without text balloons. So non-verbal situational yet anarchist humor was an absolute must to make the joke working. 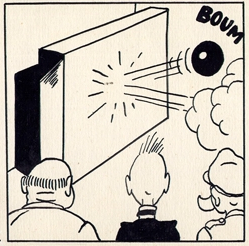 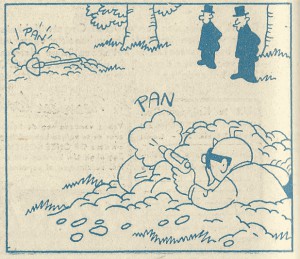 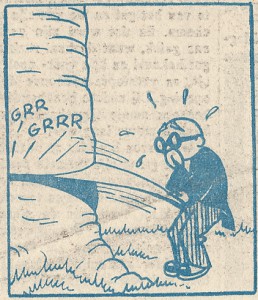 The only words used were onomatopoeia such as ‘pan’ for firing a gun, ‘boum’ for firing a canon or ‘grr’ for cutting down a tree. In the examples that we have seen, we have never seen a person actually making noise (even when you would expect him to).

French speaking readers will wonder why Bob De Moor was using several French language onomatopoeia while Professor Quick was a typical flemish series. That is something we don’t know the answer to either. You would indeed expect that he would use ‘boem’ instead of ‘boum’ or ‘paf’ sainted of ‘pan’.

Whereas Bob De Moor decided to use onomatopoeia when it came to phonetically imitate the source of a non-human sound, he omitted this option when humans were involved although you would expect to see some sound coming from the characters too in some cases. For instance in the frame on the left, you can see a chimney cleaner who obviously stressed out and crying for help. But there is no text balloon, no movement lines to indicate stress. There is absolutely nothing, just a drawing that insinuates that the chimney cleaner is in a bit of a pickle.

Since this series has never been published at all in book format, it’s not always easy to get hold of material. The strips itself were never returned, and the issues of Week-End were never archived either by Bob De Moor. What’s left are copies here and there of said magazines. Professor Quick was usually printed on the last page of the magazine, right under the “Bringing Up Father” comic by American grandmaster George McManus and counted mostly 3 and sometimes 4 frames per strip. The colour used to print the cartoon strips was often black or blue as you can see above. The signature (when used) was R.D.M. in a rainbow shape.

If you have scans or good copies of this specific comic series, then please contact us at bernard.vanisacker@gmail.com .

Barelli and Tintin in Germany (The Johannes Stawowy Archives – Part 3)

The smoking kid, a watercolor painting from 1947