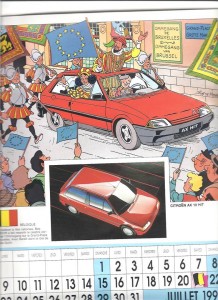 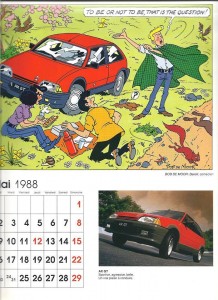 Brussels based Bob de Moor passionate Alain Demaret passed us a nice batch of rarities. In the next weeks we’ll publish several of these. The first batch includes 3 scans from a Citroën calendar from 1987 (made in 1986). Citroën was sponsor for the Centre Belge de la Bande Dessinée aka CBBD (for that year at least).

The drawings will remind many readers of the brochures the Studio Hergé produced for Citroën with drawings again made by Bob de Moor.

Barelli in the military!