In April this year we posted a drawing showcasing the lack of materials the Belgian population was confronted with as the second war continued. During (and especially at the end of) and also after the German occupation of Belgium, people were confronted with a lot of products not being available.

The drawing, or rather the cartoon, laughed with the use of ersatz products, in this case ersatz stockings. 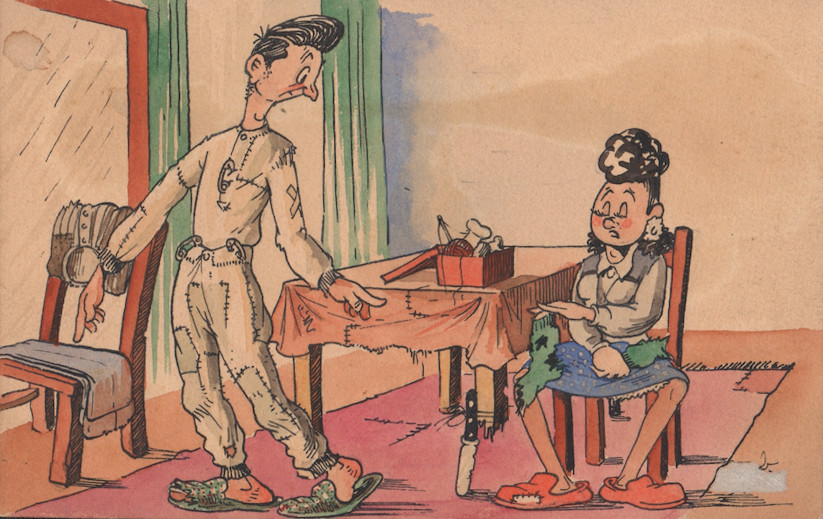 It’s not the only cartoon which the young Bob De Moor made around that time. Today we offer you a second drawing, which we found back in the huge collection Olivier Marin has.

This one is called “Krijg ik mijn.. Eh .. gaten even, Lieve?” and in English that means: “Can I get my… Eh… holes, Lieve?” The ‘holes’ refer to his socks which are more holes than actually socks.

The joke is an ironic one. You can see the man in long, very used ,underwear, riddled with reparations. At the same time you see his wife Lieve busy reparing socks. On her lap, in her right hand you can see a doc which has a darning egg inside, hence the egg shaped size of the sock. The sock she holds in her left hand and which she shows to her husband is still not repared.

You can see more elements which show the poor circumstances the family is enduring due to the (post)war times: one of the legs of the table is broken and they fixed it by putting a knife as ‘ersatz’ support. Next are the slippers of the couple, which show holes and reparations. The carpet and the table cloth are equally repaired / patched. And if you really dig into details, you can see that the underwear of the woman is also not ‘complete’, one of the legs of her underpants is missing.

Note that the signature Bob De Moor used here is a simple ‘b.’, just like the previous drawing we showed.

Cartoon of the dynasty De Moor in the comic world