2 days ago we posted a drawing on which you can see Monsieur Tric saying: “Bonjour de Laponie! A Michel, bien cordialement“, signed Bob De Moor 1968. Today we not only replaced that drawing with a proper scan, but we can also offer you another drawing made by Bob De Moor for that same person, Michel X. The drawing was not drawn in an album but was a stand alone. 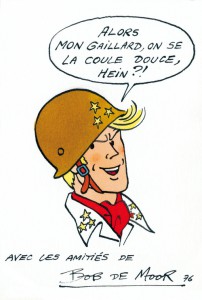 This 2nd item from Michel’s collection shows Barelli in a semi-military outfit (helmet and 3 stars on his shirt) and was sent to him by Bob De Moor during his military service in the Belgian Army in 1976. Small detail, the 3 stars are – according to us – not correctly added (unlike the correct horizontal placement in the UNICEF drawing we posted earlier).

The text balloon reads “Alors mon gaillard, on se la coule douce hein?!” which can be loosely translated into english as “Well then my boy, are you taking it easy?!”

In the Belgian army 3 stars indicate that you are a captain. Today a captain is typically either the commander or second-in-command of a company or artillery battery. In NATO countries the rank of captain is described by the code OF-2 and is one rank above an OF-1 (lieutenant or first lieutenant) and one below an OF-3 (major or commandant). The rank of captain is generally considered to be the highest rank a soldier can achieve while remaining in the field.

Barelli goes eighties for the Stripschapkalender 1985