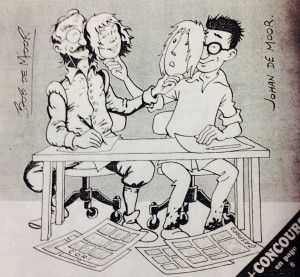 Here’s a rarity which not many will know/remember. In 1987 the french written Belgian weekly Vlan added an article under the heading “La dynastie de Moor dans la B.D.” (English: The dynasty De Moor in the comic world”). The article was accompanied by this drawing.

Johan would finish the last pages of the final Cori album, Bob De Moor being too ill to continue.