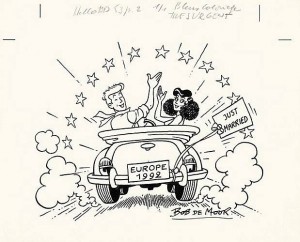 This Barelli drawing was realized by Bob de Moor on the occasion of the signature of the Treaty on the European Union (TEU), signed in Maastricht on 7 February 1992, and which entered into force on 1 November 1993. It was auctioned on April 2, 2011 for 500 Euro and is one of the last publicity drawings made by Bob in the months leading up to his passing away.

Barelli mini-poster in the Tintin journal