When we interviewed Jean-Michel Boxus from BD Must in April 2014 he told us that he – amongst other things Bob De Moor related – planned to re-release the Flandres Trilogy which consists of the 3 albums “Le Lion des Flandres”, “Les gars de Flandre” and “Conrad le Hardi”. Today we received a first look on the restoration for one of these albums, namely “Conrad le Hardi” (“Sterke Jan” in Dutch).

As you can see below, the colours have completely been redone. The cover of the album refers to the Bédéscope version, but again with a different new colouring. A release date is not known yet but it will be pretty soon. The 3 albums will be released in one go.

Enjoy page 1 of the album plus the cover. 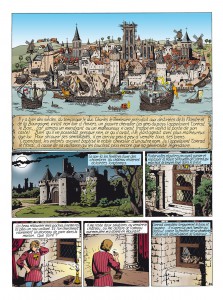 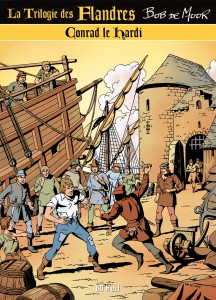 Sinterklaas with Bob De Moor in 1960