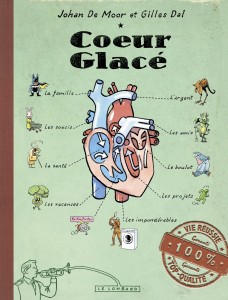 Out on the 22nd of August is the brand new album, “Coeur Glacé” (Eng. “Ice cold heart”) by Johan De Moor, son of Bob De Moor, on a scenario by Gilles Dal. The video which Le Lombard has put online is a real pearl as far as promoting a comic album is concerned and shows that Johan De Moor has inherited the joking genes from his father (in case you weren’t convinced already by his many cartoons).

The 6:32 video acts as an interview of Gilles Dal by Johan De Moor but with the duo clearly taking the piss out of… Johan De Moor. Johan De Moor acts as a comic author who is unknowingly plagiarizing Johan De Moor… can you still follow? Things get a lot clearer when you watch the actual video below.

You also will notice some of the pages for the album – and no to serious comments on them, after all ‘he’ is plagiarizing Johan De Moor – and if we are not wrong some clear line influences too… The album “Coeur Glacé” can now be ordered on Amazon France

. You can check out some more of Gilles Dal work right here