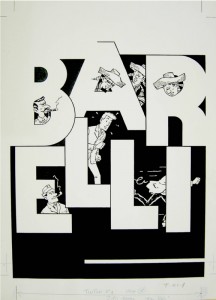 12 years after he released his last Barelli story, the second part of “Monsieur Barelli à Nusa Penida”, in 1964 a brand new Barelli adventure would pop up in the Tintin Journal: “Barelli et les agents secrets” (French for “Barelli and the secret agents”). On the left we show you the original black and what drawing made for the Tintin journal cover. For this story Bob de Moor switched to a totally different way of drawing, away from the clear Hergé line. Although not amongst the favorites of many clear line fans, artistically it’s one of the best works he did in the Barelli series – for being completely different to start with – and scenario wise it really holds the road, he had written it out before and added enough twists to the story to keep the pace going. 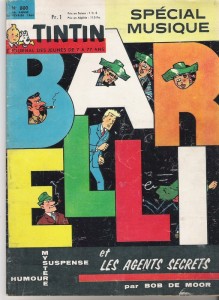 Sure thing is that Bob de Moor wanted to try out a new style, as he felt he was too anchored into Hergé’s style. When Hergé pointed out to him that his excellent sketches deserved to be inked in the same way, he eventually chose to do exactly that: ink them in a sketchy way. After one album however he felt that working like this would cost him more time as he was so used to draw in the clear line style by then…

Although this 32 page story was released in 1964 in the Tintin journal it would only see an album release some 9 (!!) years later via Lombard. Luckily enough it’s now available again

in a proper edition via BD Must. You will have noticed that the cover artwork used for the album edition was again in the clear line. Too bad, because the cover de Moor created for Tintin is more in line with the rest of the album.

Note that band The Coconuts as featured in this album would make cameo appearances on several drawings afterwards, from publicity ones to even a plate in the last finished Tintin album “Les Picaros” (check page 54 and look at the band playing on the left of the red Picaros bus…).