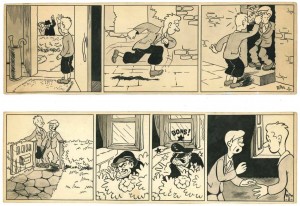 The series “Monneke en Johnneke”, which appeared in the youth publication ’t Kapoentje, is often referred to as being completely drawn by Bob de Moor. It wasn’t.

In fact a friend of de Moor drew the series. The scenario was by de Moor together with some crayon lines but it was his friend who completed everything.

“Monneke en Johnneke” was a comic which had text under the drawings and was signed as RDM.

Cartoon of the dynasty De Moor in the comic world

The squint-eyed silver fox cover artwork as it changed overtime