In 2013 the second volume in the El Spectro series by graphic artist Yves Rodier and storywriter Frédéric Antoine was published: “Trans-Amazonie”. 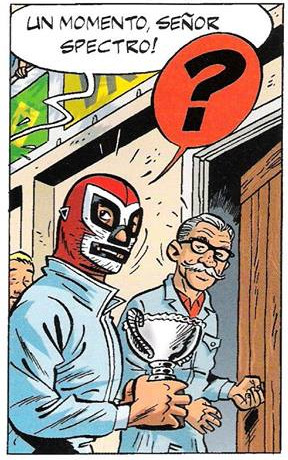 So what does that have to do with Bob De Moor you may think. We all know that Yves Rodier is a huge Bob De Moor fan (if you don’t, then you should check out this interview we had with Yves Rodier on the matter), so it wasn’t really a surprise that Bob De Moor also showed up in the album… as a mechanic called Salvatore!

The image we show you today comes from issue 26 of the comic magazine L’Immanquable in which the second El Spectro album “Trans-Amazonia” saw a pre-publication. It was kindly sent to us by Alain Demaret. If you want to have that album in your collection, know that the El Spectro albums can still be ordered via Amazon

Here’s what Yves told us a while back when we asked him about El Spectro: “I’m not really a fan of Mexican wrestling … In fact, I’m not a fan of wrestling at all! But I’m quite a fan of the films of Mexican wrestlers from the 50s-60s, “El Santo”, “Blue Demon”, “Mil Mascaras” and so on. That was my first inspiration for “El Spectro”. The subject of my comic is more connected to the Franco-Belgian clear line than one would say at first sight. El Spectro is a classic hardcore hero, just like Tintin or Bob Morane are. Being a ‘luchador’ is only a pretext to travel around the world (he is a star of the ‘Lucha Libre’), and be athletic, know how to fight, to be adventurous, and wear a mask that makes him instantly recognizable (like the haircut of Tintin, Spirou‘s costume, the Asterix helmet, etc …). So I managed to combine my love for the Mexican Luchadores movies, adventure, spy and horror movies of the 50s-60s with the Franco-Belgian comics. This is probably a combination that has never been done before, but I think my series is a continuation of those of Tintin, Gil Jourdan, Bob Morane, Spirou, Michel Vaillant, Dan Cooper, etc … A Mexican wrestler as a hero, well worth a Belgian reporter, a French detective, a race car driver, or a Canadian airman I’d say, right?”

20th anniversary of the Tintin Journal with Bob de Moor